The gig economy: the concerns are fair but the advantages are undeniable 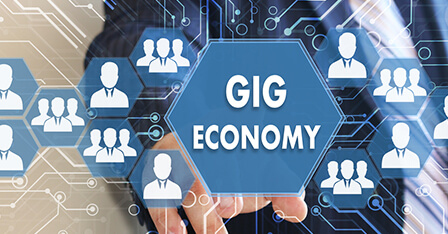 The gig economy: the concerns are fair but the advantages are undeniable

People’s approach to work is changing. Without falling into the trap of over generalising the matter, there has been a clear movement in recent decades away from more structured and long-term forms of employment towards more flexible, fluid careers.

This trend has taken many different forms. For one, the proliferation of cloud computing coupled with the increasing prevalence of ‘Bring Your Own Device’ policies have led more and more employees to work remotely. Professionals in all manner of roles have now moved away from the 9-5, desk-based routine – instead, people today are able to work from any location at any time.

Similarly, there has been a broader shift in the employment landscape; one that has seen people reconsider the concept of having a ‘career for life’ and become more open about the prospect of changing employer, sector or job type with greater regularity.

In more recent years, there has been another factor playing an increasingly significant role: the rise of ‘the gig economy’ – an umbrella term applied to the practice of independent workers engaging with organisations or individuals for short-term assignments and one-off projects.

Understanding the rise of the gig economy

WeMa Life recently commissioned an independent survey among more than 2,000 UK adults, which revealed that 19% of the country’s working population currently ply their trade within the gig economy. What’s more, the research found that 6% of people in traditional full-time jobs (1.6 million people) said they intend to leave their roles in the coming 12 months to join the gig economy.

And importantly, this is not just a trend being witnessed among millennials; while a quarter (26%) of people aged between 18 and 34 currently work within the gig economy, the figure still stands at 13% among 35 to 54 year olds and one in six (16%) among the over 55s. Cleary, there is a notable appetite across all age groups.

So why is self-employment and contractor work becoming more common? Is it because there’s a dearth of full-time positions available, or is it because professionals are more attracted to the control, flexibility and choice provided through the ‘gig’ model?

In reality, it differs depending on each person’s circumstances. There are, after all, numerous reasons why an individual would want to work within the gig economy, which include both push and pull factors. For example, a 9-5 job may prove untenable for some people – they might be raising children, preparing to enter semi-retirement, suffering from a health condition or having to look after a sick family member. Indeed, WeMa Life’s aforementioned research showed that 46% of people working in the gig economy choose this option because they cannot work a full-time job due to other life commitments.

For others, short-term work is simply more attractive than working for one company for an extended period of time – the gig economy delivers variety and movement. Ultimately, whether it’s because of the new opportunities self-employment presents, or constraints that make a 9-5 routine unfeasible, the majority of people arrive within the gig economy due to the prospect of flexible work; in WeMa Life’s survey, 71% of people who work in the gig economy say they pursue this type of employment because of the flexibility it affords.

There are undoubtedly many reasons to praise the gig economy for the way it’s empowering employment across all areas of the UK’s working population. But the gig economy also receives a prominent amount of criticism – and rightly so. On the one hand, organisations whose workforce is made up largely of contractors often come under fire because it’s seen as a method for them to avoid certain taxes or waive employee rights. And this is something that cannot be overlooked.

There can be no escaping the fact that, at present, leaving full-time work in favour of the gig economy involves people opening themselves up to different risks. After all, when an individual is contracted to a single employer in a full-time role, they will typically benefit from numerous support structures such as paid leave when sick, on holiday, or having a child, not to mention the stability provided through a contract with notice periods and employment rights. Self-employed people do not enjoy such financial and legislative support, which can be a cause for concern.

Unsurprisingly, there is a desire among most gig economy workers for the government to introduce greater regulation in this area. Over half (55%) of the self-employed people WeMa Life recently surveyed said they felt unprotected at present, with late payments and unfair treatment of workers cited as two of their main concerns.

Like many societal, cultural, economic or even technological trends, there is often a phase wherein things change faster than legislation can keep up. That is certainly true of the gig economy, and for self-employed to share the same protection and rights as normal workers, the UK Government must work with industry bodies to create new regulatory frameworks to help govern this growing part of the employment landscape.

While acknowledging these criticisms of the gig economy – things that unquestionably need to be addressed – the advantages are plentiful. And not just for individual workers, but also for consumers and both the public and private sectors. Specifically, the gig economy provides a hugely valuable solution to peaks in demand for certain services. At WeMa Life, we have seen the importance of this within the care, health and wellbeing sectors.

In May 2018, a study by the Care and Support Alliance found that more than a million elderly and disabled people are being failed by the social care system as a result of a £2.5 billion funding gap. Or, to put it another way, there is a huge collection of people across the UK who require domiciliary care services but are unable to access them due to NHS funding restrictions, limited care home availability and a shortage of high-quality agencies supplying carers.

To address this problem, gig economy workers can fill the gap in the domiciliary care market, with nurses, companions and specialist carers able to provide vital services on an ad hoc, short-term or on-going basis. That is what WeMa Life itself was launched to do: connect care in communities by bringing together skilled workers in the health and care space with those who need these vital but often hard-to-access services.

The gig economy not only benefits workers by giving them flexibility and choice, but it also enables organisations to meet fluctuating demand. Simultaneously, consumers benefit from the fact that the gig economy is creating more opportunities for them to access and connect with skilled professionals who can deliver hugely valuable services.