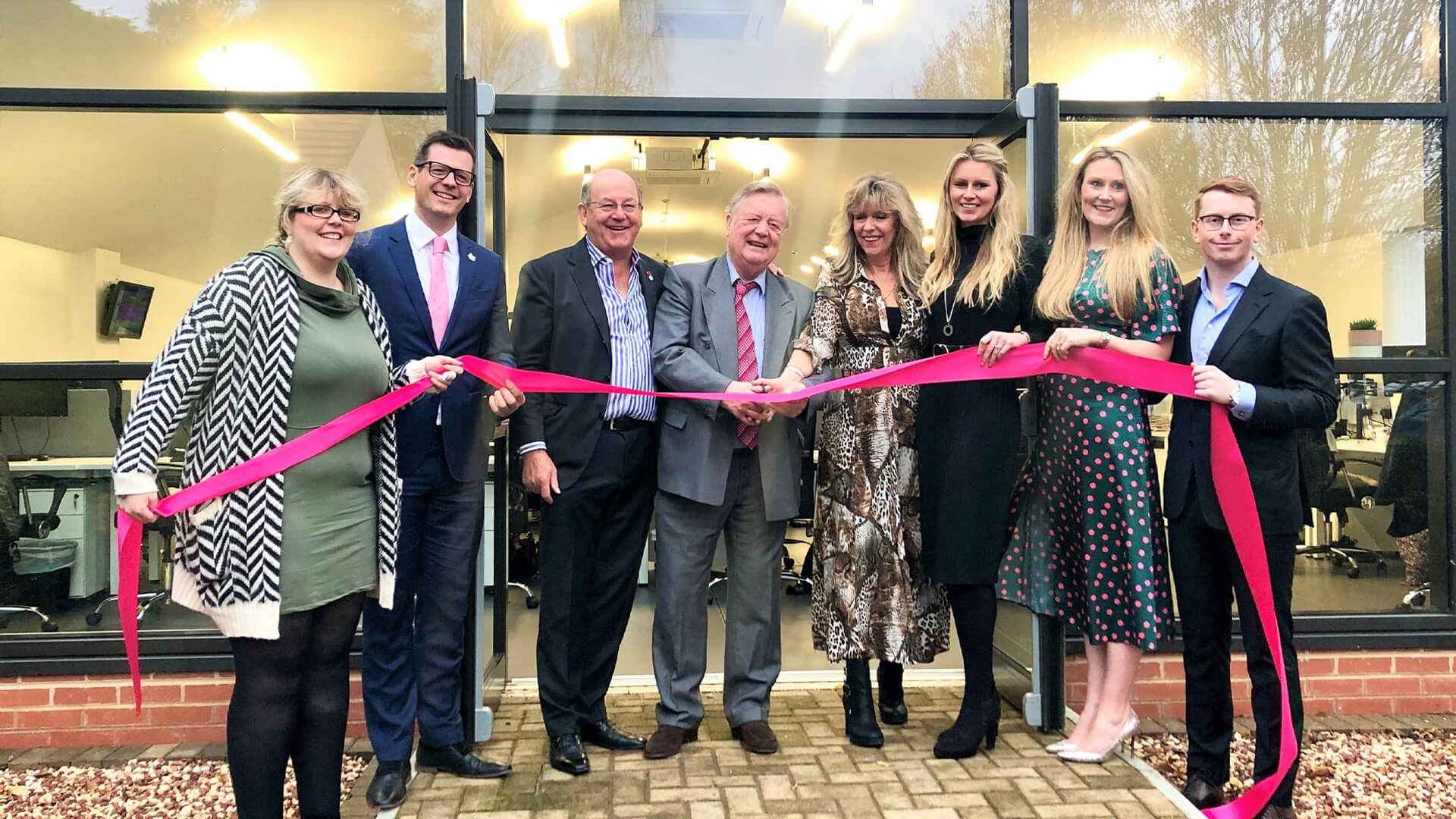 Leading politician Ken Clarke was the guest of honour today at the official opening of a new £1m digital media hub at a top East Midlands brand agency.

Mr Clarke joined hundreds of guests and employees at a special celebration at the headquarters of family run Champions (UK) plc based in Costock, one of the fastest-growing businesses in the region.

He cut the ribbon on the company’s vibrant new media centre, which houses more than 40 members of staff working in digital services such as web development, SEO and pay-per-click advertising, alongside a PR and social media team, a brand audit department and influencer division.

It is the third expansion in Champions’ 16-year history, reflecting the huge success the business is enjoying. It recently celebrated recruiting its 50th new member of staff this year and leapt into 12th place in the East Midlands Top 200 fastest-growing businesses.

Mr Clarke, who recently stood down as the Conservative MP for Rushcliffe after nearly 50 years in Parliament, also opened its HQ in 2009 and then a 6,000sq ft extension in 2015.

He told the assembled crowd: “Thank you for the invitation and I’m grateful to be opening an office for Champions again. I’m here because I’m delighted to come and congratulate the family and to celebrate this latest move by Champions to this centre. It’s a mark as we all know of Champions’ continued success.”

The opening began with a Champagne reception where guests, including Champions’ clients, celebrities and employees, were able to mingle ahead of a delicious three-course meal.

On arrival, guests were wowed with an incredible champagne fountain formed with 250 glasses of Moët & Chandon.

Two X Factor stars in the form of Sam Bailey and Andy Abraham performed, along with one of the UK’s finest pop, soul and funk bands, Urban Intro. Renowned pianist Adrian Dixon also added to proceedings.

Included in the star studded guestlist was non other than William Roache MBE, best known for his long running portrayal of Ken Barlow in Coronation Street. The actor remains a strong supporter of the business, having worked with them for over a decade.

Guests were offered a tour of the new media hub, with digital director Amad Tababa on hand to explain the company’s vision.

“Since I joined Champions in 2014, I’ve seen the digital team grow significantly,” he said. “We have more clients than ever before and are undertaking digital work in a variety of new areas.

“By moving into a new purpose-built suite, it allows us to further develop our digital offering, supporting all of our clients’ needs. This year has seen us make big strides, working with a number of high-profile clients and we’re looking forward to seeing what other exciting developments happen in our new home.”

Champions was founded in 2003 by John, Donna and Matthew Hayes. John’s son Matthew is the managing director and his four siblings, Louisa, Sophia, Roxanna and Jack are also on the company’s board.

Now with 125 employees, the firm continues to grow its enviable client base across a wide range of sectors, including engineering, property development, law, accountancy, aerospace and private healthcare industries.

It offers 14 areas of expertise, which as well as digital, web, brand strategy, PR and social media, includes marketing and creative services, publishing, advertising and managing events, including a number of regional sports and business awards. The business also has divisions for after dinner speakers, influencer and celebrity, music and entertainment.

Managing director Matthew Hayes said the launch had been a great success. “Our new media hub marks the next chapter in Champions’ story and today was a great way to mark the occasion,” he said.

“Having the right digital presence is vital to the success of any business which is why we’ve invested heavily in this area and we’re thrilled with the growth we’ve seen.

“Over the next few years this is an area we are keen to build on even further and this new building is the perfect way to do this.”

For more information on Champions or any of its services, visit the website https://championsukplc.com/ or, call on 08453 31 30 31.